What Are Your Symptoms

Dr. Quintero provides relief for a wide range of conditions including:

The physician may see mild head injuries in the acute to chronic stage in the office setting usually subsequent to a car crash or a fall.  Concussions usually are seen in motor vehicle collisions in which the head hits a broad soft surface in contrast to most subdural hematomas which occur from smaller hard surface impacts as commonly seen in falls and assaults.

Minor head or neck injury may be associated with post injury dizziness.  Head and neck motion should increase dizziness if it has originated in the neck. Cervicogenic dizziness can be secondary to nerve overstimulation, altered neck or lumbar unbalanced musculature, neck or lumbar muscle spasm or vertebral artery problems.

Blurry vision after whiplash is common. Chronic symptoms are probably due to brain stem lesions or nerve irritation.

Ringing In The Ears

Causes may include whiplash neck myofascial spasm, TMJ dysfunction, concussions and cranial or cervical fractures. Over the counter and prescription medication use must be considered as a possible cause of these symptoms.

Headaches may occur after a minor rear end crash or higher speed crashes.  These headaches include muscle tension headache, muscle contraction headaches, cervicogenic (originating in the neck) headache and migraines.  Sources for these headaches include sensory input from the postural and stabilizing myofascial structures of the neck, shoulder and upper back.  Many post head injury headaches originate from soft tissue and joints of the cervical spine.  Frequent use of aspirin and acetaminophen products by chronic headache suffers often perpetuates and worsens headache frequency and intensity.

Strain/Sprain Related To The Neck And Back

A neck or back strain is a partial or complete tear of a muscle or tendon implying that muscle/tendon fibers have elongated beyond the normal anatomic motion barrier and or exceeded the muscles tolerance level to velocity change.  Neck or back strains typically are seen in lower speed frontal and side crashes in which the occupant is braced.

A neck or back sprain is a partial or complete tear of ligamentous structures usually occurring after the outer muscles have stretched and torn.  Neck and back sprains always include muscle and tendon injuries with the ligament trauma.  If neck motion causes the ligaments to be overstretched then both strain to the muscles and overstretching of ligaments occur simultaneously.

Post-traumatic cervical and lumbar disc herniations are seen in practice. The primary areas involved include the C5 to C6 and L4 to S1 levels. Cervical disc injuries may occur in motor vehicle collisions in which rapid rotational accelerating forces cause tearing of annular fibers or in cases in which a seatbelt acts as a focal point for bending the body. Patients who exhibit radiating (shooting) symptoms down either upper or lower extremities should be suspect  for a disc bulge or a cervical or lumbar herniation.  Axial compression neck injuries during which the occupant's head sustains a blunt blow may cause a symmetric disc herniation with bilateral symptoms.

Shoulder, elbow and wrist injuries are commonly seen in private practice after automobile crashes. These injuries most frequently occur to the driver holding onto the steering wheel in front or rear end crash or to the front passenger bracing against the dashboard or window in a frontal crash.

The proposed mechanism of elbow and wrist injuries was found to include a direct blow or compressive force between the palmar aspect of the wrist and the steering wheel or dashboard causing wrist hypertension and median nerve stretch and trauma. The primary symptom of elbow and wrist nerve injury is numbness.

Hip injuries may be seen in occupants using seatbelts having excessive flexion (forward movement) around a lap belt or sliding under the seat belt or submarining.

Most knee injuries are due to direct impact with the knee bolster, dashboard, steering column, steering wheel, console or side door structures. In a frontal car crash in which there was sufficient force to cause the occupants knee to hit the dash, knee bolster, or other firm object and there is evidence that the region right below the knee is bruised, it is likely that ligament injury occurred.

The primary mechanism of thoracic spine injury for the restrained occupant includes rapid deceleration as the rapidly forward moving torso suddenly stops at the end of strap causing the side of the torso that does not have the shoulder strap to twist forward to flexion.

If the occupant hits the torso on the steering wheel or dashboard the spine is loaded indirectly with the injury mainly due to bending movements and or torsion.

Lumbar spine injury and pain are common problems following motor vehicle accidents. The mechanism of lumbar spine and disc injury are primarily due to restraint of the pelvis by a lap belt while the lumbar spine is flexed and stretched. The usual onset of low back pain associated with radiating symptoms into the buttocks and lower extremities could be due to a herniated disc. Incidents that can provoke these symptoms can vary from a mild bump (near end crash with the struck car being stopped) to a bus going over a pothole, to severe intersection collisions.

Several studies have concluded that spinal injury may promote early degenerative joint disease also known as arthritis. There are long term effects of injuries that do not become evident until years after the insult for example osteoarthritis. Trauma damages the disc once the disc is damaged, alterations may progress into the surrounding tissues. Decreased in disc space caused by bulging or herniated disc may cause alteration in the biomechanics of facet joints, changing their motion, contact surface, pressures, and eventually leading to degenerative changes.

Chronic pain is generally defined as pain that lasts beyond the normal time to heal from an injury. This is commonly thought of as more than three months. Chronic pain maybe categorized into two large groups.

1) Chronic disease such as osteoarthritis or degenerative disc disease will have ongoing pain symptoms because their disease and degeneration continually progresses.

2) Those who have healed from the initial incident, but are not fully relieved of pain. It could be due to the body compensating for the injury and that the compensation now causes more pain. The body may have created scar tissue or adhesions, a natural mechanism for healing. However, the scar tissue itself may be pressing on nerves or within the scar tissue, there may be trapped nerve fibers and that is what is causing more pain. Chronic pain may also be the result of ongoing acute pain.

A literature review concludes that (LLLT) low-level laser therapy reduces pain immediately after treatment in acute neck pain and up to 22 weeks after completion of treatments in patients with chronic neck pain. It compares favorably with other forms of therapy particularly pharmacological interventions. Clinical benefits of (LLLT) occur both when (LLLT) is used alone or with exercises and stretching. The results of (LLLT) compare favorably with other therapies and especially with pharmacological interventions, for which evidence is sparse and side-effects are common. Dr. Quintero uses the Erchonia PL-5 laser as part of her treatment protocol and it has proven to be very effective for both chronic and acute pain by using different frequencies.

Erchonia lasers emit visible coherent light that is appllied to affected area. Bundles of light pass through the dermal layers, and are received within the cell membrane by specific energy photo acceptors. The increase in intracellular energy results in altered cell membrane permeability, and physiological changes occur through an enzyme cascade to affect several biological processes. Within the injured musculoskeletal tissue, low-level laser light initiates increased microcirculation and enhanced tissue regeneration. The overall effects are decreased pain and inflammation, and increased range of motion. Ask Dr. Quintero if the laser is right for you! 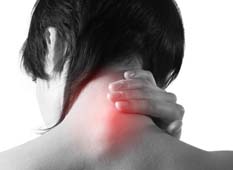 In summary these are some very common injuries suffered by patients involved in motor vehicle collisions. These injuries are complex and frequently multiple. Occupants have the potential for many types of injuries. This will leave you with a much better idea of the tremendous forces you can encounter in auto crashes. Our ultimate goal is obtaining an accurate diagnosis that will in turn provide for more effective patient management and improved treatment outcomes.